The Council of Organizational Consultancies (ROA) has a new chairman: Ronald van Rijn, in daily life a partner at JBR. His main ambition: to convey the fact that the ROA provides added value to the sector. The transition to an inclusive network for agencies and consultants should reinforce this.

Ronald Van Rijn (54) has been a director at the ROA since 2015, and after holding the role of vice-chairman for a while, he now moves up to the highest position. Van Rijn's appointment coincides with Johan van Triest's retirement from BMC, and therefore also from the ROA - the board position within the ROA has traditionally been filled by a board member working for the constituency of the advocacy group for the consulting industry.

Van Triest worked at the government consulting firm for more than 12 years. In recent years, this was first as top man of BMC Advies, the consultancy practice of the business services provider, and most recently as chairman of the board of the group. Having led the agency during the final phase of its integration within Randstad subsidiary Yacht, Van Triest felt that the time had come to hand over the baton to a new face. He is now a director of a new investment fund, focused on innovative companies in the healthcare sector. 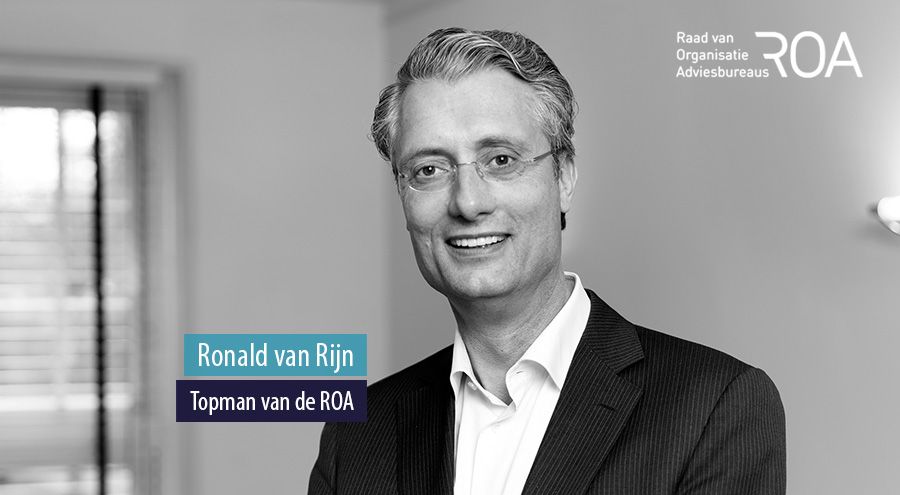 In his advisory work, Van Rijn focuses on mergers & acquisitions, valuations, raising growth finance and restructurings. During his long career he has assisted dozens of directors, regulators, shareholders and managers, with an emphasis on clients active in the maritime, offshore, energy, food & agri and technology sectors.

Among experts, Van Rijn is known as someone who can bring people together to achieve the best joint results. He himself describes himself as a consultant who likes to help clients "see the right perspective" and as someone who values commitment. "I like to keep some distance from the problem, not from the client."

In his new position, Van Rijn will focus on the further rollout of the strategy that has been initiated in recent years. Originally, the ROA was an exclusive club of management consultancies. The industry association was founded in 1970 and represents the top of the industry through a membership model. Focus on quality is the most important spearhead here - The ROA has a code of conduct for members who, according to the advocate, are among the highest in the market, and actively challenges all firms to raise the quality of their consultancy work to ever higher levels.

This focus on quality remains at the heart of ROA's strategy. At the same time, the focus is on a transition from an exclusive club to a more open network. In addition to becoming an ROA member, since last year it has also been possible for consultancies to join as partners. In exchange for a partnership, consultants from participating firms get access to three networks focused on professionalization and networking.

"The ROA is now an inclusive industry association. We make an effort to connect with all organizational consulting firms in the Netherlands that matter, member or non-member."

"We make an effort to connect with all organizational consulting firms in the Netherlands that matter, member or non-member. This makes the ROA an inclusive industry association; it's not just about the affiliated members, but about the interests of the entire industry," Van Rijn said. He emphasizes that it is precisely by acting together towards both internal and external stakeholders that the industry can make a bigger fist. "We want to work together on a sector that can be seen."

The top tier of the Dutch consulting industry accounts for some €1.3 billion in revenue, according to research. Leading agencies from abroad (think McKinsey & Company, Boston Consulting Group or Capgemini Invent) and home-grown (think Berenschot or Twynstra Gudde) play an important role in helping organizations in the public and private sectors with their most complex challenges and successfully implement change processes.

The added value of consultants has been debated since the profession's inception - research conducted a few years ago by the ROA, and research last year by ROA's UK counterpart the MCA, found that, on average, consultants add more value to business and society than they cost.

Van Rijn: "The sector can be proud of the added value for the economy and for society." Van Rijn wants the ROA, as representative and initiator of the sector, to display this even more emphatically to the outside world.

In his own work, the new top executive calls himself the "playing captain." Now he looks forward to taking on this role as president of the ROA as well.